Racism on Australian IT market.

I am Russian immigrant in Australia from January 2016. I have university degree, Microsoft certification and 12 years experience in SQL Server and SQL Development. In Russia I was successful IT professional and immigrated in Australia due to political reason. In Australia I am unemployed since my arrival in Australia. Why? Ordinary racism. 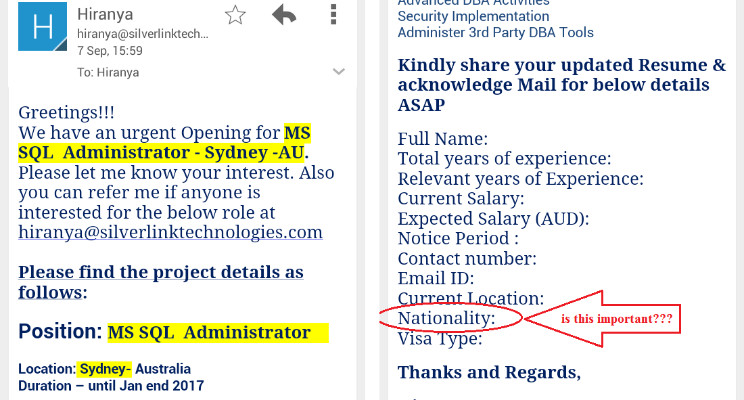 In my first year in Australia I applied more than 1000 resumes for advertised positions on Australian employment websites. Every time I am "oh, Russia, do not worry you are not suitable bla-bla-bla". No one wishes to discuss my skills and experience, but everyone make judgment about my suitability based on my ethnicity. No one tries to invite me for interview, but everyone certainly knows that I am not suitable. Everyone tries to argue that Russian IT professionals are high valued in Australia, however, my experiment has shown that this is not true.

In July 2017 I made experiment, follow the link to read full experiment description.

Please do not tell me fairy tales about my skills and equal opportunities. No one has tried to contact to me to discuss my experience. Everyone who rejected my Russian resume were happy to represent my fake German resume and advised that my German resume is interesting, although the German resume is a copy of Russian one.

Experiment showed that skills and experience are absolutely worthless if candidate's ethnic origin is not suitable for particular occupation. Agents and Employers select ethnicity, but not skills. Racial segregation exists in Australia. There are allowed and prohibited nationalities for every occupation in Australia. Russian software developer are in demand in Australia, however, in any other cases employers do not wish Russians. Australia is retrograde racist country which is proud of racism.

When I arrived in Australia I wanted to assimilate, but now I do not. I am disappointed with Australia and I regret that I have made wrong choice between Australia and Canada. I had invitation from Canada, but chose Australia. Unfortunately, I do not have money to start new immigration process.

Comments for this post were locked by the author